What the Church Can Learn from the Hardcore Scene


A couple months ago, Jeff and I attended a show that our son’s band was performing in. Now that may not sound so odd, but the story has just begun. You see, our son plays in a hardcore band. Hardcore (formerly called hardcore punk) is a subculture of music that originated in the late 1970's and has evolved into a faster, harder and more aggressive style of music.  We’re talking screaming, moshing, look-like-you’re-killing-your-best-friend music. It’s sometimes so loud that I fear my ears will literally explode (Sorry to my audiology friends out there). It’s sometimes so vulgar that I feel my heart will explode (true story!) It’s sometimes so chaotic that I fear my introverted Self may implode. And yet, I love my son and so I went happily to this show. Our son lives out of state, and we miss him! So when he told us he’d be playing at a show in Louisville, we definitely wanted to be there to hug his neck!

When I say that Jeff and I were a little out of place, I’m not exaggerating. We walked into a pizza parlor that serves as a music venue for hardcore bands. It’s underground, dark, a little smelly, and the concrete block walls serve as the perfect echoing mechanism for all the screaming that happened. When we first walked in, the guy selling concert tickets assumed we were just there to grab a pizza (I hear it’s delicious; I haven’t tried it myself). We assured him we were there for the show, and when we explained that our son was playing, he let us in without paying. 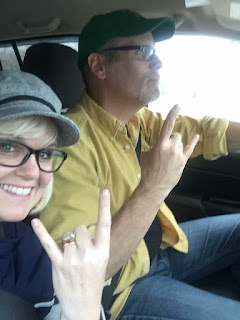 We walked into this crowded space filled with people from all walks of life. There were kids who couldn’t have been more than 12 or 13. There were college professors and middle aged moshers. There were folks with hair colored a dozen different colors, and those with no hair at all. There were those covered head to toe in tattoos, and a few girls with not much clothing on. There were gay couples, straight couples, transgendered people, wealthy folks, people who had almost nothing, people who had obviously just recently smoked a LOT of weed from the smell of things. And in the midst of this crowd, my son caught sight of us and ran to us, threw his arms around me and picked me up in a bear hug. He wasn’t at all embarrassed that his middle-aged (and slightly un-cool) parents were there. He proudly introduced us to his friends, all of whom were so kind and talkative and engaging.

We listened to 3 or 4 bands before Bryan's band played. I was told to "get up on the seat of the booth" while bands were playing to avoid being in the mosh pit. Believe me when I say I wanted no part of being in that pit! I watched as people threw punches in the air, kicked like bucking broncos, screaming in each other's faces with spit flying,  and swung their arms like helicopter rotors. It was complete chaos from the outside looking in. And yet, there was an order to it. Unbeknownst to me before that night, there are rules to the mosh pit. And if you don't follow those rules, you will be sent out of said pit. But that's another story for another time.
I stood in that little room, head thumping from the bass pounding, and it dawned on me that I was in a really cool place. And I was somewhere that maybe surprisingly, the Church could learn a few things from. Here's my takeaway from that night and from conversations with my son and others in the hardcore scene about what I believe the Church could learn from Hardcore. 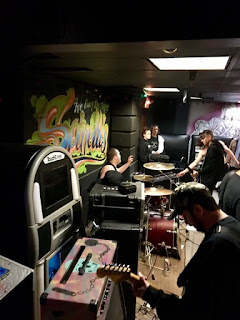 1. How to be genuinely open to ALL.
When I say that I stood amidst folks of all walks of life, I was serious. It's not often that I stand in a room with people that don't look, dress, act, believe, and express themselves much like me. It's our human nature to surround ourselves with people we connect with, who think like us and have our same set of values. Yet that night, I was surrounded with a true smorgasbord of people. Some of them are Christians- sold-out followers of Jesus. Some of them are atheist. Some are in between somewhere. Some were gay. Some were straight. Some were bi-sexual. Some believed that drugs are ok and acceptable. Some have pledged "straight edge", a commitment to not use drugs or alcohol at all. Some were vegan; some loved meat. Some showed tattoos depicting stories of their lives, and some had smooth skin with no marks at all. And EVERY SINGLE ONE OF THEM (Myself included) WERE TRULY WELCOME AND WANTED.
I sat in my church Sunday morning and looked around me. I saw one person with brightly colored hair, a few who showed tattoos, but for the most part we all looked and acted pretty much the same. And I wonder if that's how the Church is supposed to look. Somehow I don't think so. And what's more, I wonder if my gay or transgendered friends feel like they'd truly be welcome in our churches, or if they'd be stared at and judged before we even got to hear their stories. I'm not saying we back down from our convictions about biblical truth. That's not what this is about. I'm just saying, "are we truly open to ALL people from ALL walks of life?" The hardcore scene is sincere about this. I know because I was welcomed openly there. I've seen firsthand that the hardcore community doesn't just talk about acceptance; they practice it. They mean it when they say they are for everyone and want you there.
2.  The people in the hardcore community take care of one another.
The bible tells us in Galatians that we are to "bear one another's burdens", yet I look around my town, and I see people in need. I look around our world, and I see people literally dying from unclean water, poverty, acts of racism, and war, and I have to ask myself, "What am I doing about it, and what is the Church doing about it"?. With the hardcore community, when there is a need, it is met immediately. My son tells me of a person in their community who had a house fire. They raised enough money in a short time to replace everything lost. When my son had his wallet stolen while on tour, his money was replaced and tripled in just a few short hours once people heard. I've watched this community rally around someone whose child has cancer and was in need of money for medical treatment. I've watched them do a show to raise money for the homeless in communities. I've watched them give generously from their wallets for those in need, despite the fact that many of them live paycheck to paycheck themselves. They don't even seem to give a thought to the fact that they may need the money they are giving; they simply see a need and know they can meet it. So they do.

Now, don't get me wrong. I know that there are some followers of Christ who are getting this right. I know there are churches who are meeting the needs of those in their communities well. Please don't hear me saying that no one in the Christian community is doing this. I'm just wondering if maybe we could be better at this. I'm thinking out loud here that maybe we could have more of a mindset that says "yes" to helping immediately. I see that in the hardcore community, and it's impressive. 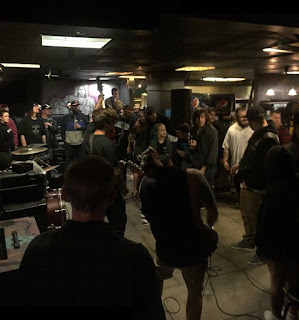 3. PASSION.
The people in the hardcore community are passionate people. You hear it in their voices, in the language they use (albeit foul), in the songs they write and scream sing. You see it in their faces. You read it on their t-shirts. They aren't shy about what they believe. They don't hold back even when they know those around them may disagree. They can hear other opinions, respect those opinions and never for a moment slack off in their own convictions. The Church could take a lesson here. We have the One Truth that is worth a passion like this, and sometimes I fear that we are hiding instead. When faced with the decision to speak up for the things of Christ or remain silent, too often we are remaining silent. You'll never spend any amount of time with someone connected to the hardcore community without knowing with absolute certainty what drives him or her. How well is the Church doing at that in our communities?

The hardcore community gets a bad reputation often. I confess I've been guilty myself of judging them based solely on their screaming music and vulgar language. I don't condone the language, but after getting to know the people, I understand it. And that is possible. It's possible to get to know someone closely and to genuinely love them without condoning their choices in life. When we take the time to get to know someone, to HEAR THEIR STORY, it starts to make sense sometimes as to why they act the way they do. When we really get to know people, we are better able to love them. True love is in the knowing. True love says "I see your life, and I am still here, even if I don't believe the same way". True love says "I think you're worth my time and attention even if we aren't the same". I've seen that among the hardcore folks that I know and love. I see it in some of Christ's followers too, but I wonder if maybe, just maybe, we could all love a little harder?

So, mosh on all of my hardcore friends. I'm watching and celebrating you. And Church, let's Mosh on too! 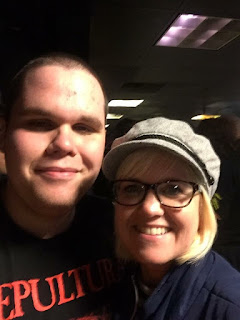 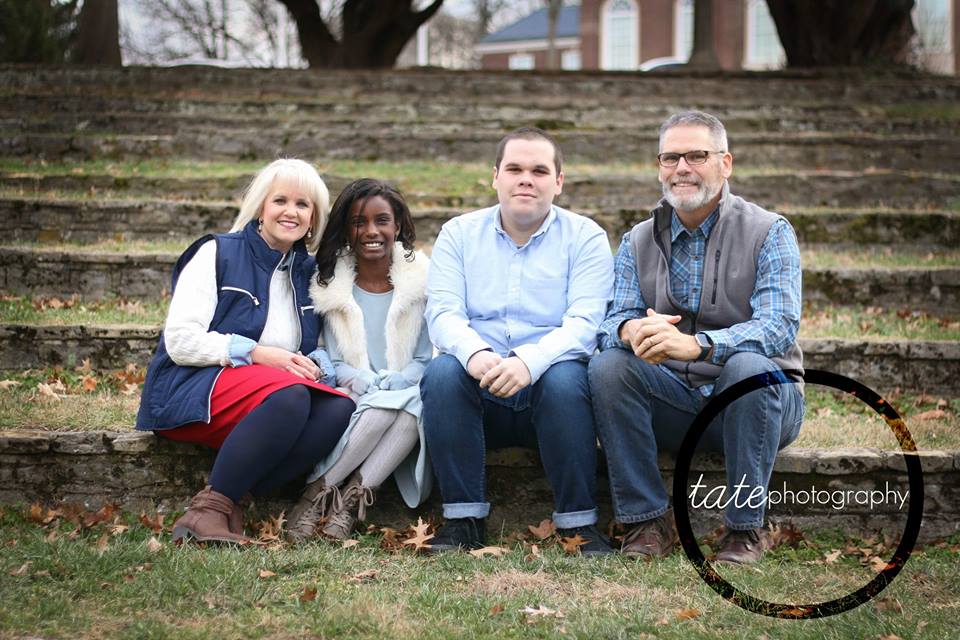